The Radical Plan To Phase Out Earth’s Predatory Species 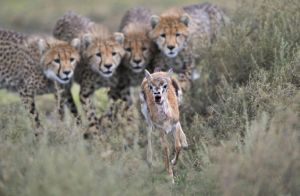 “Should animals be permitted to hunt and kill other animals? Some futurists believe that humans should intervene, and solve the “problem” of predator vs. prey once and for all. We talked to the man who wants to use radical ecoengineering to put an end to the carnage. …

My own conceptual framework and ethics are secular — more Bentham than Buddha. I think we should use biotechnology to rewrite our genetic source code; recalibrate the hedonic treadmill; shut down factory farms and slaughterhouses; and systematically help sentient beings rather than harm them. …”

Posted by adventlife on January 8, 2015 in General News and tagged predation.

My journey - The good, bad and the ugly